My 11th short movie out of 12 this year was shot in two Countries Laos and Thailand called “Choo Choo.” My friend Matt starred in it and we based it on a true story that he experienced. I’ll explain more after you watch it so it doesn’t give any of the story away.

Originally Matt and I traveled to Chaing Rai, Thailand to shoot a scene at the amazing White Temple. The short was originally called “The White Monk” and was going to be an action movie. But after Chaing Rai we realized we were right at the border of Laos and made a last minute trip there. While we were on a two day slow boat to Luang Prabang in Laos Matt shared a story of a girl that used to talk to him in baby talk. Instead of calling him Matthew she called him “Mattchoo” which turned into “Choo Choo” and she spoke to him in baby talk all the time. I thought this was utterly hilarious and I peed in my pants multiple times. I just couldn’t get this story out of my head. So I decided to change the idea to incorporate his Baby talk Choo Choo story.

The only problem now is I can’t look at Matt any other way than Choo Choo.

My 10th short movie out of 12 this year was shot in Kuala Lumpur, Malaysia called “One Language.” What if the world converted to one language. The language of Dance. My 9th short film out of 12 this year was shot in Split, Croatia called “Dear Adriana.” Since I was living by the Adriatic sea for a month I wanted to write something incorporating the sea. So I created a little thriller movie. This is a story of a man and his relationship with the Adriatic sea. 9 little movies down and 3 more to go. 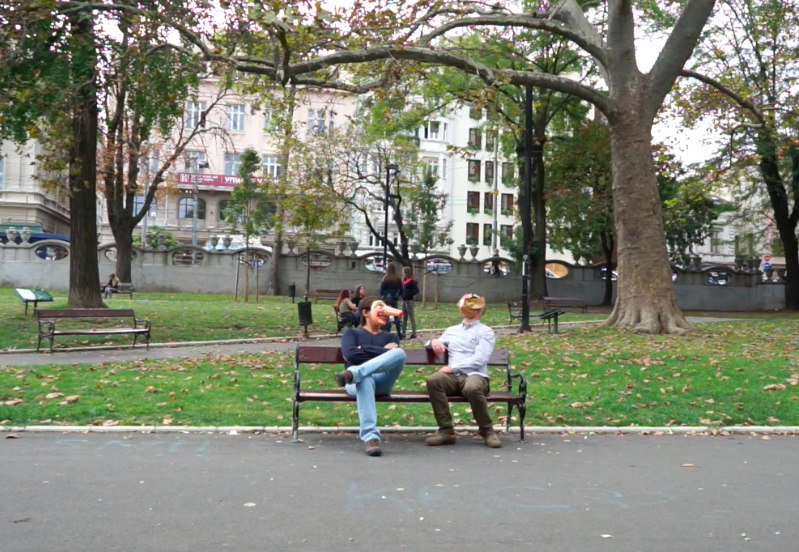 My 8th short film this year was shot in Belgrade, Serbia is called “Mr. Owl & Penis Nose.” It’s about the different masks we hide behind as people in general. The idea came from two masks I bought in Cusco, Peru of a Penis Nose and an Owl. As I’ve been traveling each month the Penis Nose has started to get a bit damaged so I decided to shoot something with them before they were damaged to much.  8 films down this year and 4 more to go. 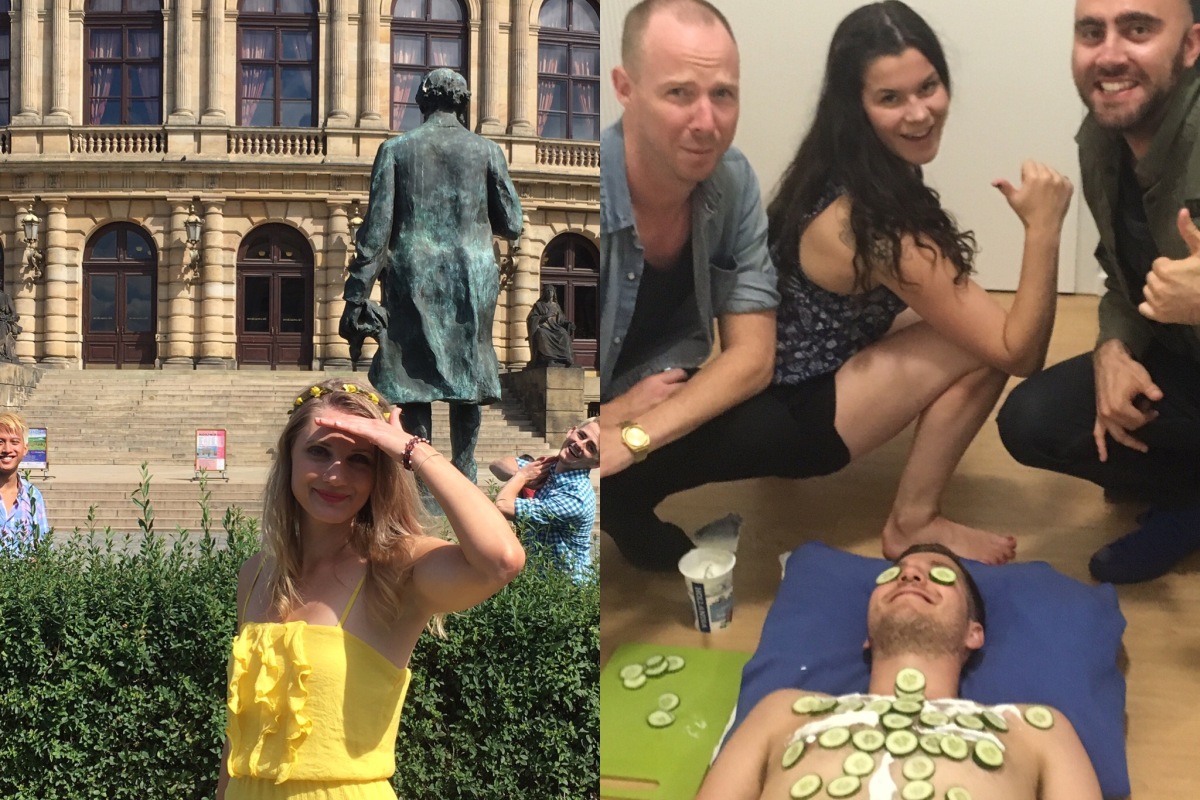 For the month of Prague I asked my fellow travel companions to submit ideas for short films in one paragraph. Then I picked my favorite to write and shoot this month in Prague. Well I actually picked two favorites. Both are very different than each other and different than my normal style. So it was nice to mix it up with two different film ideas. Below are both films “Princess” and “Hippy Hollow.” So this is my 6th and 7th short film out of 12 this year, at this point I will have 13 short films by the end of the year.

“Princess” is a story of Princess searching for her Prince in Prague from the dark mind of Matt Sherwood.

The second short is “Hippy Hollow” which is about 3 roommates, 2 weirdos and 1 love from the minds of David Baum and Kirsten Westeinde. My 5th short film this year shot in London is called “Garbage Can Stories.” It’s about a writer that can’t get anything published and throws all his ideas in the garbage. But what if we went in the garbage and read his stories. Shot in London and cost about $40 US dollars in props. 5 films down this year and 7 more to go. My 4th short film this year is called “The Llama Llover.” It’s about a woman who loves llamas and a man that loves her. Shot in Cusco Peru and cost me about $50 US dollars to make mainly because renting a Llama for 2 hours costs about $33. 4 films down this year and 8 more to go!! Hope you enjoy. My third shirt film of 12 this year is shot in the Uyuni Salt Flats in Bolivia. It is called, “The Salt Flat People.” It’s about a guy who finds himself in a weird place that is all salt and meets a Salt Flat person.

Want to give a big thanks to my two actors Matt S and Jonathan. Especially Jonathon who had white shit smeared all over his body and took days to get off.

This short film was very difficult mainly because I was very sick in Bolivia. I had a basic idea of the Salt Flat people that I could shoot in the Uyuni Salt flats. However, I tried to write a script when I was sick and read it the next day and it was giant piece of smoking shit. So I decided to work around being sick and I shot footage based on a loose story structure and a variety of facial expressions from my actors and then wrote the script after. Also I made them speak through their minds since the wind in the salt flats was unforgiving so I could write anything I wanted for my actors to say. I do not recommend this process as script ideas died after this because I just didn’t have the right footage. However, I did work around being sick and have something that looks gorgeous and is a different style than I usually do which means it’s not comedy. So don’t expect giggles and the feeling of being tickled. If you want that you should tickle yourself while watching it. If you do tickle yourself while watching please take pictures of it and send them to me as I will cherish them like a newborn baby.

3 Films down and 9 more to go this year. My second short film this year is called “Open Mike.” It’s about a guy who can’t talk like a normal person and the only way he can talk is by singing. Shot in Buenos Aires it costs me 420 pesos to make, about $28 US dollars. Hats off to my 10 remote year actors (Mike, Heather, Natalie, Leah, Tom, Shawn, Jacek, Zoe, Melissa and Anhton) and for Tanya for co-producing this with me. I’ll post behind the scenes and all the fun to make it later. 2 films down this year and 10 to go! My first short film this year is called “The Moister.” It’s about a Mermaid that wants to travel the world (Cordoba, Argentina). This film cost 80 pesos to make, about 5 US dollars, hells yeah. Hats off to my amazing Australian friends Tom and Tanya for being amazing actors. I’ll post a behind the scenes and all the fun to make it later on. 1 film down, 11 more to go this year.